Main News The process of drawing prizes from the brand "BLISS" visited "potrebiteli.uz" 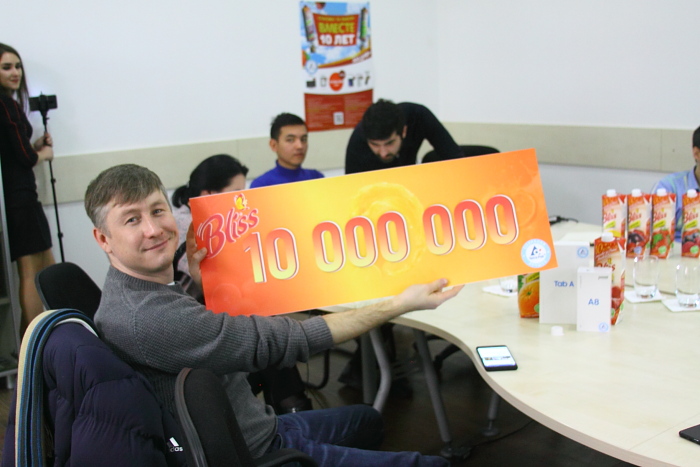 04.12.2018
The process of drawing prizes from the brand "BLISS" visited "potrebiteli.uz"

... Dialing a number. Phone on speakerphone. We silently listen to beeps. Finally the challenge is accepted:

- Have you participated in the Bliss promotion?

- Bliss. The number from the lid of the juice by SMS sent?

You can hear a woman calling someone. Handset takes the child.

- Hello. What city do you live?

- Have you participated in the Bliss promotion? The number from the lid  of the juice by SMS sent? - the employee repeats his question

- Yes, SMS was sent. Four covers were, all numbers sent.

- Can you see your lids now? Do you have a number there that starts with 3N?

I heard as a child wheezes and rattles the lids

The child diligently pronounces letters and numbers. We all look at the screen. Matches.

- Congratulations! You won the Bliss TV! - the employee says solemnly

In the phone silence

“Thank you,” the baby whispers. And suddenly on the other end there is a scream, addressed to someone in the house:

We are laughing. So happy it became from this childish happy squeal, as if we ourselves had won, and not him. We, as Consumer administrators, were invited by observers to the next prize drawing from Bliss. We watched the process of drawing biasedly and strictly, asking questions and specifying details for each action. For they knew that the community would then ask us. So what is the essence of the promotion?

You buy any Bliss juices with a stock icon. Look under the cover code and send it via SMS to the short number 7889. Drawing every week on Mondays. How many juices buy, so much and send.

RULES ON THE SITE BLISSPROMO.UZ 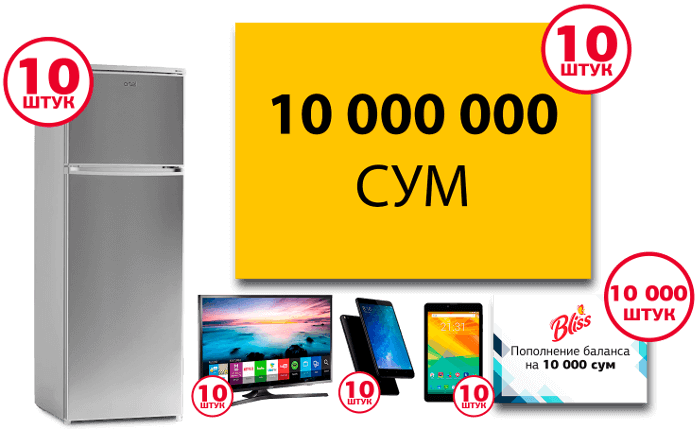 Weekly, someone who drank the juice Bliss wins:

How is the draw held?

Many responsible people gather in a large conference room. Here are employees, managers and observers. All actions of the operator, leading the drawing, are broadcast on the big screen.

The operator of the competition has two tools: a table where all the codes sent via SMS and the phone numbers from which they are sent are entered. Here it is, this program. Filmed at the very end of the game: The second tool is the Random, which issues a random number via the Internet in a given range, according to the number of playing SMS / numbers from the covers.

The operator presses the "Generate" button, and Random gives a random number. This number is entered in the table opposite the name of the prize. The program quickly finds the phone number and code from the cover, which are entered under this number. Everything is clear. Whose number is displayed, he won the prize.

And so for each prize. All-all actions are recorded in detail in the protocol, and all put their signatures, if they agree with the purity of the game.

We followed the draw of each prize. And each winner was called right in front of us.

Do not throw away the lids until you win!

Imagine there were two cases when people won. They were called by the organizers of the competition, and the people lost their caps. And that's all. Prize they can not get. Because they have no proof. This is done specifically so that the selection of codes by SMS is not sent. So take care of the covers all week until Monday. Until the results are known. And let you get a call from Bliss and say:

- You won, take your juice cap

What you need to remember?

Only play SMS sent this week. That is, if your cap has not won, then next week it will not play. You have to drink another juice. Although why one? You can drink a lot. The number of codes from the lids from one number is not limited. Drink tasty juices for health, play and win: 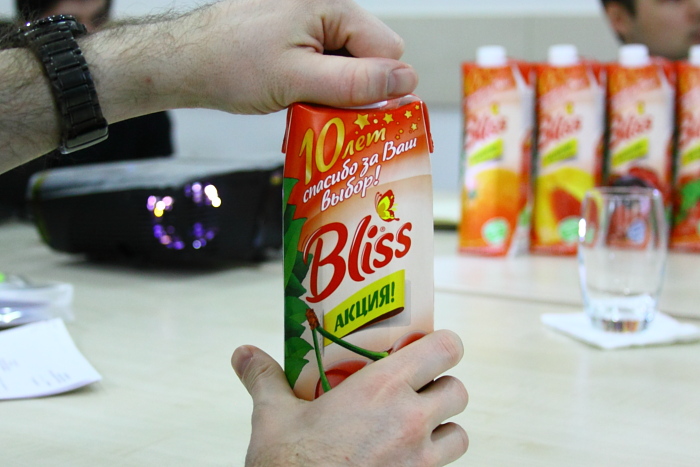 The terms of the promotion and the number where to send the code are written directly on the package. You can't go wrong

About all bad cases and advice from Bliss

In the group Consumer talked about stocks with covers from other companies. So there, the bad sellers in the shops took the bottles, opened them, looked at the code, closed them and put the bottles back on the shelf. A person bought this bottle, tried to send a code, but they did not accept it. Because the game system already has one.And  we asked Bliss employees about this. Wouldn’t it be like that?

Look at what Bliss gives you. In the photo below, two packs of promotional juice. One is open and the other is not yet. Guess what where? Look at the ring under the lid. In the open juice once, the ring goes down. And in the juice, which was not opened, the small ring closely fits the lid with the code:

That's all. Now nobody will deceive you.

What juices are involved in the action?

Bliss pomegranate with cherry and plum;

When is the next rally?

These drawings have already passed:

You will now participate in the following four:

It remains to drink juice every Sunday until Sunday and send codes from the covers.

What violations have we noticed?

Well, what can I say, dear, according to the results of our control? The Bliss is fair. We saw everything with our own eyes inside and out. Data tables, independent random, protocols - all checked. We found no violations. Although tried hard to find.

Even the covers were opened at random. All packs with promotion sign codes are in place. Under each cover there is a code:

There are still 4 draws ahead. 4 sets of cool prizes, among which 4 times 10 million each, 4 TVs, 4 refrigerators, 4 tablets, 4 smartphones and 4000 recharges to the phone.

Participate in the action required. We wish each of you to win something the most.

We, personally, decided to drink Bliss juice all 4 weeks and send the code from the cover by SMS.

If you have questions, you can read on the website of the action or call the hotline. Although the regulations are so simple, it’s enough to read enough on a pack of juice:

RULES ON THE SITE BLISSPROMO.UZ

Record yourself: the following draws on Mondays all December. Right before the New Year.

Good luck to you all. We wish to win Ten Million. Or TV. Or a fridge. Or a tablet. Or a smartphone.